Did you receive an email from Dropbox with the title “Please acknowledge Dropbox API v1 deprecation”? 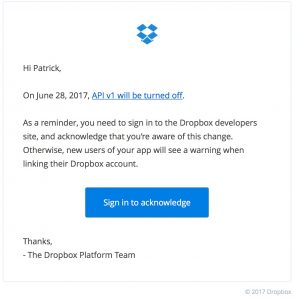 It means you are using an old version of the Dropbox API in your app and now it’s time to upgrade to the new Dropbox API v2. This is unfortunately a completely new API to learn and integrate, which will take you a while. This is why we made this short tutorial to show you an alternative (which is also mentioned on the Dropbox website).

Use CloudRail to Integrate Dropbox

CloudRail is an API Integration solution which allows you to integrate more APIs in less time. The best thing is, you will never deal API changes again. So if Dropbox for example decides to switch to a v3 of their API, CloudRail will do the hard job of maintaining the integration for you. The interface towards your app will always be consistent. Sign-up for a developer account now, it’s free.

Here is a short code sample to show you how easy it is to integrate a cloud storage provider (or all at the same time) via the Unified Cloud Storage API:

But isn’t CloudRail a SPOF?

No. It exactly behaves like the original Dropbox SDK. All data flows directly between your app and Dropbox. Non of your data will ever pass a CloudRail server.

As a reminder, you need to sign in to the Dropbox developers site, and acknowledge that you’re aware of this change. Otherwise, new users of your app will see a warning when linking their Dropbox account.

Thanks,
– The Dropbox Platform Team