A new report by Unified API integration leader CloudRail shows that Dropbox leads the consumer cloud storage market with 63.8%, ahead of Google Drive, OneDrive and Box of all users choosing their service.

A newer version of this report is available: Cloud Storage Report 2017

CloudRail, a leader in API integration management solutions for app developers, released a new report analyzing the millions of connections made to cloud storage providers by users from CloudRail powered mobile apps. Dropbox is the clear leader with 63.8% of all users choosing this provider. It is followed by Google Drive with 17.8%, OneDrive with 11.6% and Box with 6.8%. 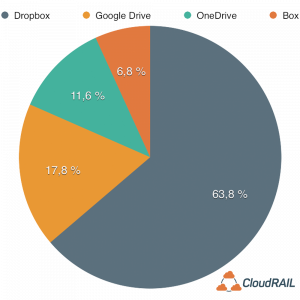 Cementing its leadership position further, the report shows that Dropbox users are the most active generating 80.8% of all API activity from mobile applications. 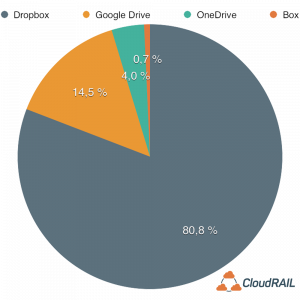 The report measures the distribution of all cloud storage users among Dropbox, Google Drive, Microsoft OneDrive and Box. The distribution is calculated by analyzing the usage of API integrations among CloudRail powered mobile apps. This means that the four analyzed providers are integrated in a 3rd party app to provide additional functionality like e.g. access of files for modification in the app or backup of app data. The user of the app has the free choice which of the four providers to use. Considering that apps are usually accessing data which is already stored within the cloud provider, this is a clear indicator which provider users use for other purposes as well.
CloudRail provides products and solutions for software developers to easily integrate all four cloud storage providers via a unified, single API. Code once, access all. Developers and enterprise customers from all industries rely on CloudRail to power the integrations in their apps.