The new Cloud Storage Report 2017 by CloudRail shows that Dropbox loses market share to Google Drive and Microsoft OneDrive on mobile devices. Nevertheless, Dropbox remains the most used provider with 47,7% market share. This statistic is especially unique because it reflects actual usage vs. just the total number of users.

With our CloudRail API Integration Solution we help developers to connect to various APIs much faster. One of our most used categories is Cloud Storage. Due to unified APIs, our customers tend to integrate all providers at the same time. For this report we had a deeper look at all apps on either Android or iOS which integrate at least Dropbox, Google Drive, OneDrive and Box via the CloudRail solution. So users of those apps always have the free provider choice which is a safe way to determine their favorite cloud storage vendor.
With these numbers we had the chance to get a realistic picture on how many customers are actually using the respective service. Most statistics just talk about the total number of users which shows an inaccurate picture since many vendors like Google or Microsoft “force” customers into their cloud storage offerings by bundling it with a generic account which might be used for a completely different purpose like email.

Moreover, we analyzed statistics on how often users consume a cloud storage integration which allowed us to draw conclusions on how active these users are with the respective cloud providers. This report is based on more than 12 Million used integrations across thousands of apps between November 2016 and today.

From all users of cloud storage integrations across our customers, Dropbox is with 47,3% the #1 choice followed by Google Drive with 26,9% and Microsoft Azure with 15,3%. 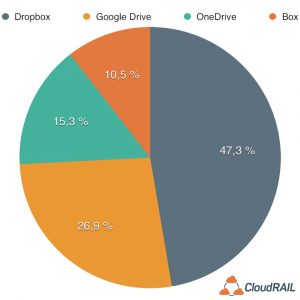 If you compare these numbers with our last report which was released in November 2016 you will realize that Dropbox massively lost users to Google Drive, OneDrive and Box over the last 5 months. It seems like a lot of users switched to the more competitive offerings from Google and Microsoft. What is impressive though, is the growth of Box.com since they seem to focus more on enterprise users. 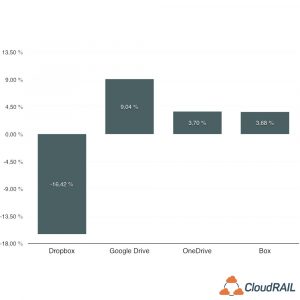 When it comes to usage of the cloud vendors, Dropbox is leading with a massive 77%. Followed by Google with 17,2% and Microsoft with 5,1%. 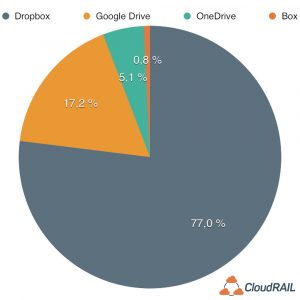 Compared to the 2016 report, we get a similar picture. Dropbox is losing share to all other providers, but still has the clear leadership position. 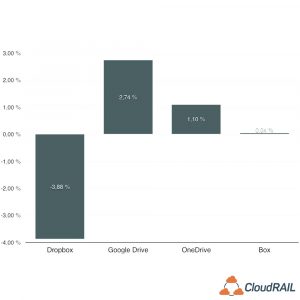 All these statistics are based on anonymized data which is collected by CloudRail powered API integrations in Android and iOS applications. Only apps which integrate at least Dropbox, Google Drive, Microsoft OneDrive and Box were considered for the report. These apps are used across many industries and target audiences and usually have a worldwide user base. In total, more than 12 million integrations were analyzed. Apple iCloud is not part of this report because it does not provide a public REST API and is thus not part of the CloudRail API Integration Solution. Smaller cloud vendors were not considered in this report.