API Marketing: Strategies To Get More Traction On Your APIs

More and more companies open up their solutions to developers or provide so-called micro-services via APIs. Creating an API is usually straightforward, but how to convince developers to use your API and integrate your great solution into their apps? This question brings us to a pretty new topic called “API Marketing” or “API Community Building”. This tutorial will give you an overview how to implement great API marketing strategies to get more traction on your API.

Why Are Integrations So Important?

Let’s start with why you should care about integrations at all. In case you directly monetize over your API, the answer is pretty clear — revenue. For all other cases, it of course highly depends on the service you offer. Usually, there are two major reasons for active API marketing campaigns which apply to most industries. Let’s say you are Dropbox’s competitor and take cloud storage as an example.

Did you ever use an application which had built in Dropbox support to access files or store backups? Probably yes, as millions of other users. With every integration, you get part of the respective app and access to all of those users. So every time someone uses the app and wants to back up files to a cloud, your service will be presented as one of the alternatives.
It’s a perfect multiplier: If you achieve integrations in 50 apps with each 100k users, you reach 5 Million users! So API marketing can actually turn into a great marketing / sales channel for your product. 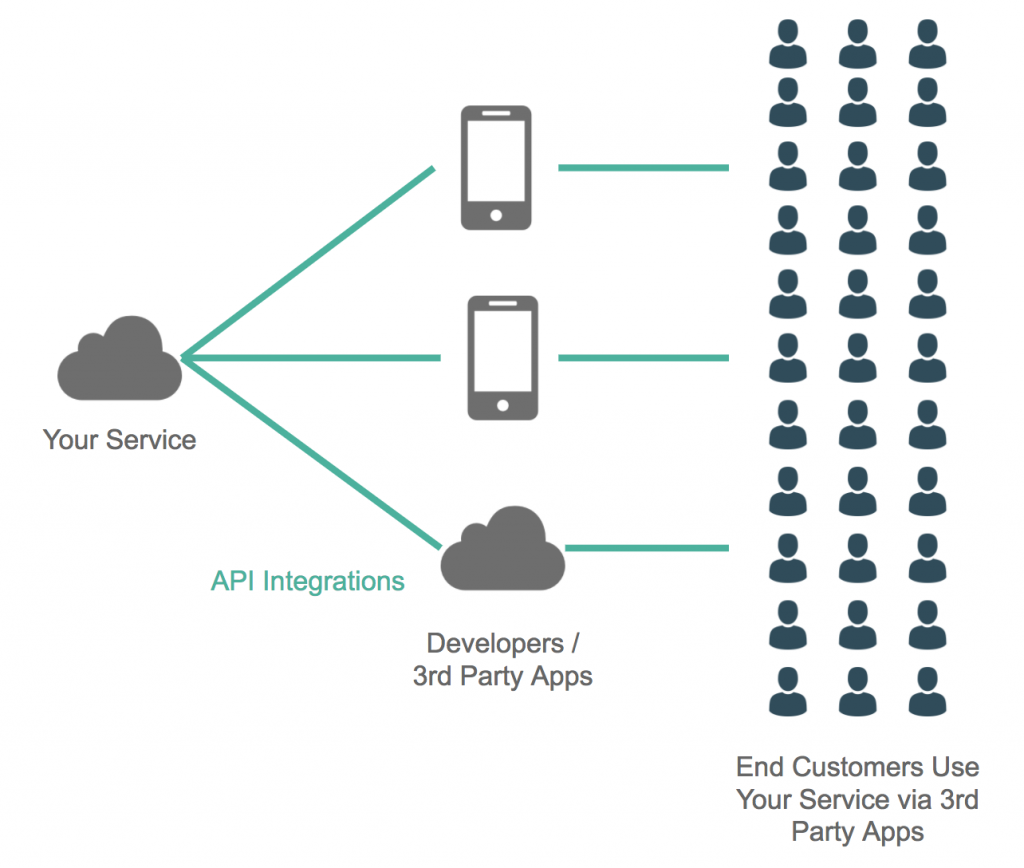 It Helps To Reduce Churn

Let’s take the cloud storage example again and imagine one of your existing customers get’s a new business tool which is just compatible with Google Drive? What do you think will happen? Either the customer reaches out to you and complains or (in most cases) he just switches to Google. The more software compatible with your offering, the lower the chances that you lose a valuable customer.

The Basics Of API Marketing

So you’ve just launched an API? Great, now it’s time to convince developers to actually use it. We start with some fundamental basics of every API offering, which should actually be obvious, but unfortunately most API providers far away from a perfect solution here.

This is probably the most important point. Developers need a way to understand your API quickly. This includes a well structured documentation, potential error messages and all features of an API. What most companies do wrong: Let the author of the respective API also write the documentation. On the one hand, this is a good idea because this is the person knowing the interface best. On the other hand, developers, especially the author, often tend to a very minimalistic way of writing docs because they 1) hate writing and 2) assume a lot of knowledge which they have, but other developers might not have. The result is, the docs are so minimalistic, that it’s hard to understand anything, some functions are just not documented at all or especially error cases are not covered.
Documentation is key and you should spend enough time to make it perfect. It might be a good idea to check docs from big providers like Google or Stripe to see how they structure their content. Also keep in mind, that this is an ongoing task. Every change in the API needs to be reflected in the docs immediately.

SDKs or so-called helper libraries wrap the native http API calls into functions / methods which can easily be used by a developer. No developer wants to deal with a pure REST API and coding the http calls manually. Especially when your API requires complex authentication like OAuth, SDKs are absolutely mandatory. Since SDKs are always platform specific, you need to cover all major programming languages like Java, Node, Swift etc.. Those SDKs need to be maintained! This is an ongoing process as well because platforms change over time. Especially for newer languages like Swift, SDKs need to be updated multiple times a year. Developers rely on your API and SDKs to always work flawlessly.

Good documentation is great, but most developers like to start with a running example. You should provide small code snippets (for copy & paste) as well as full sample projects for every API and each platform. Developer use them to start with something working and then modify it according to their requirements.

Even if you have perfect docs, a lot of developers will have questions or face issues. You should implement a responsive support system for this. A good way is usually a special forum for developers. It is also possible to leverage StackOverflow with a dedicated tag for this.

Standards are there for a reason! If you don’t have a very good argument, you should follow them without any modifications. Developers can deal with OAuth2, but if you just slightly modify it, it will be a pain for them. My advice again is, check out how companies like Google or Stripe design their APIs and don’t think you could optimize an existing standard.

If you follow the above points, you should have a compelling offering, which allows developers to consume your API. Now let’s talk about how you get your great API in front of the developer community with some API marketing strategies.

You need someone who is able to talk to the developer community. This is usually a position somewhere between marketing, support and development. A developer evangelist is active in communities, attends developer events, writes content and samples and keeps the communication channel between developers and your company healthy. This person becomes part of your target developer community and not only evangelizes your API but also helps out on generic topics which makes him a valuable member.

Hackathons are events where participants usually solve a specific programming task in 24-48h to win some cool prices. This is a great way to get initial feedback on a brand new API or new features and connect with a local developer community. Just think of some cool use case around your new API and create a programming challenge around it. Smaller Hackathons can be easily hosted on your own. Find a nice place, order pizza and beer, think of some prices and invite developers to join. To get more traction, you can also join one of the bigger Hackathons as a sponsor or co-organizer.

If you launch a new API, there are some ways to get initial attention from the developer community. From our experience posts in the following channels work quite well:

Besides some attention, you usually get very direct and mostly valuable feedback as well.

Developers go to so-called marketplaces to discover new APIs and quickly consume them. One of them is our CloudRail API Marketplace. A listing there gets you in front of a lot of developers who search for solutions like yours every day. There are also a lot of lists on GitHub around specific topics and industries, where a listing could be beneficial.

Building a developer community around your API is hard work and takes a lot of time. You should always start as early as possible. Developers don’t act like an ordinary consumer. They have their own communities and places where they find new APIs. API marketing thus hasn’t much in common with traditional marketing and is more around community building and engagement. This needs to be understood and reflected in the API marketing strategy.

How To Accelerate This Process?

A bit of self-promotion: CloudRail can help you here. Our job is to get your API integrated into more applications. We take care of documentation, SDKs, code samples, developer support and especially API marketing. Leverage our huge developer community and technical expertise to get more traction on your API as fast as possible. Contact us if you want to learn more.